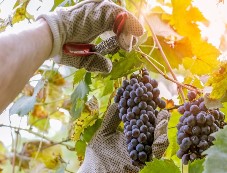 The Italian harvest 2018 is well on the way – although not finished yet. If the 2017 harvest has been among the poorest in the last fifty years, when the climatic conditions were much worse and unusual, this year the production has returned to the average values. Coldiretti, Europe’s largest agricultural professional organization, forecasts a 15% increase in wine production of 46 million hectoliters. This is up from 40 million hectoliters last year.

Experts at Coldiretti say it was an abundance of rain that caused this year’s increase in production. In June, Italy saw 124% more rain than the historical average. It helped to rebalance the water reserves of the land, after last year’s drought.

Main Italian wine magazine, Corriere Vinicolo and UIV (Unione Italiana Vini) calls the 2018 harvest “exceptionally normal”. At the same time it was not an easy vintage due to rain in many regions during the first part of the growing season. Followed by a sunny and dry August and September. OIV expects a production of 49 mill. hl. and an increase of 15% compared to 2017. With some regional differences from +5% on Sicily to +25% in Tuscany.

According to Assoenologi (the oldest and the most numerous Italian Association of enologists), all the Italian regions show the large increases in production, especially in central Italy, where the production of the last year was affected by drought. Upon the first estimates, Apulia becomes the most productive Italian region. With 11.9 million hectoliters, after several years, it returns to the first place, followed by Veneto (10.3), Emilia Romagna (7.8) and Sicily (5.8). These four regions together in the 2018 will produce about 36 million hectoliters that is about 65% of all Italian wine.